One of the major topics that gets tossed around in money management threads is the question of whether you should vary your stakes according to how you're playing. Some players think you need to stick to level stakes at all times. Others believe you should be increasing your bets when you're on a good run, and decreasing them when you're doing less well. Of course, the traditional out-of-control punter does precisely the opposite, making the bets bigger and bigger as they see more of their bankroll going up in smoke. Which approach to take is largely a matter of the situation.

Increase the bets when on a good run - This seems like good advice. Often, though, it isn't.

If you're doing particularly well, it's probably down to you having a good run rather than you playing at a higher level than normal. That run of good luck could disappear (or even reverse) at any moment, so raising the stakes just as you're likely to hit a less fortunate set of cards is a definite no-no. All this tactic ensures is that you'll get through your money more quickly when your luck turns.

Of course, this won't apply when you think you have an advantage. If you're counting cards and a promising set of cards seem to be imminent, you definitely want to be raising your stakes. Tournament play is beginning to take off in the blackjack world, and this will also demand that, at times, you'll want to raise your stakes - particularly as you get to the close, or believe that a player is starting to become unhinged. As a rule, though, you won't want to increase the stakes. Let the runs of luck play themselves out. Enjoy them while they last, but don't let them come back to bite you.

Decrease the bets when you're doing badly - This makes little real sense.

If you're playing badly, just walk away, and don't return to the tables until you've got your game-head back on. But decreasing the stakes just so that you can do less damage when you're not playing well is an idiotic approach. At times you'll hit a bad run of cards. In that case, as long as you're not becoming depressed, and are continuing to play optimally, there's no reason not to carry on playing - at some point, the cards will get better, and you'll quickly improve. But always remember - nobody forces you to play cards. If you're not happy with the way you're playing, just step away - whether that's for a few minutes or for several weeks.

Level stakes - Unless you know that a good run of cards are coming up, you should be playing the same stakes at all times.

It'll be the run of cards that define your success on any given day, so you can expect dramatic swings. There's no point in making these more dramatic than they have to be.

There are two exceptions to the rule that you should be playing level stakes. If you're a card-counter, then you're clearly going to be keeping bets low when you have no edge, but pushing up the chips when a lot of big cards are due. The other exception is tournament play.

Tournaments are quite possibly the next big thing to hit the gambling world. Most blackjack players will feel they can't beat the house, but maybe they can beat their fellow players. In practice, many of the hardened tournament players will have their basic strategy down pat, so you won't be able to eke out an advantage by playing 'better'. However, by being more in control of your emotions and not blowing up by playing too big (or, indeed, too small) a bet, you'll cruise past many of the other players, even if, on paper, they seem very much equals.

You should always look at the rules of the tournament. If the blackjack pays less or more, for example, this will be something you'll want to bear in mind. The crucial rule, though, refers to the number of hands you'll play in each round. Divide your allocation of chips by the number of hands per round. This should give you your minimum bet. If, for any reason, you want to put the pressure on your opponents with a maximum bet, this should be double the minimum bet. It's generally wise not to bet more than that, as otherwise there's a good chance you'll be making an early exit. 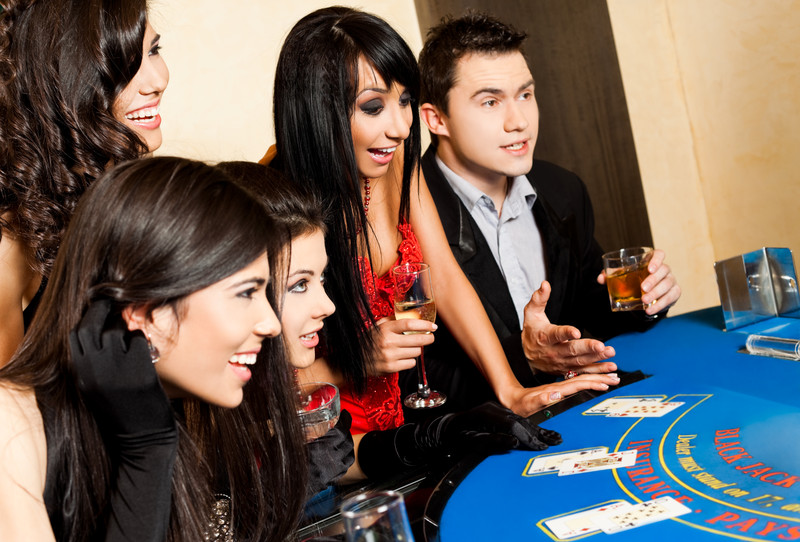 The first rule of tournament play is to survive and get through to the next round. But the second rule is not to fall too far behind the leader. You'll gain far more when winning a tournament than you will when finishing fifth, so you want to give yourself a good shot at the top pot. You'll probably want to play small stakes for much of the round. But once you get to within three or four hands of the end, you might want to consider raising your stakes if you're not in a good position.

If you're not very far behind the leader, this can be as simple as playing your standard maximum bet for the last few hands rather than the minimum. If you're in danger of not making it through, you should be more aggressive, perhaps playing a third or even half your pot at a time. You play patiently throughout the round so that you can afford to step it up dramatically towards the end, if needed. There's no point playing aggressively from the first hand and risking having little left at the end.

If you're lucky enough to be in the lead, try and bet no more than the standard bets of the other players. As you get to the last hand or two, you might even want to consider cutting your bets so that you're losing less. The key here is retaining an advantage for the last round. You don't want to be chucking away a substantial lead on just one hand.

The very last hand of the tournament is obviously crucial. You might want to be placing the maximum bet here, as you don't want to be outpointed by other players just because they bet more. If you're a long way off the top three, though, it might well be worth placing a very small bet. If the dealer scores a brilliant hand that knocks everyone else out, you could end up scooping a very substantial prize relative to the small amount you would make for settling for a lowly placing.

With tournament play, you want to think very carefully about how you play each hand - but particularly the last few of each round. If you have confidence in your methods, and always play the same way, you'll find yourself making money over the long term. On the other hand, flipping from one strategy to another is liable to see you making mistakes under pressure. Tournament play isn't necessarily about being better than your opposition. It's about knowing your own game better, and always playing your favoured strategy. Know the game, and you'll down the majority of your opponents.

If you want to beat the house edge, tournament play is the key. Here, it comes down less to the casino, and more to the players you're up against. And most players are psychologically weak, prone to over-betting at all the wrong times. They may score spectacular wins from time to time, but overall, their losses will stack up more than their victories. In order to beat them, we need to be battle-hardened and resolute. Let's next have a look at how we might be able to control our emotions and our bank rolls.